The Middle East is enjoying an important period of stability as oil prices, economic growth of 5.1% fuel the recovery ou...

The Middle East is enjoying an important period of stability as oil prices, economic growth of 5.1% fuel the recovery out of COVID, said Crescent CEO. 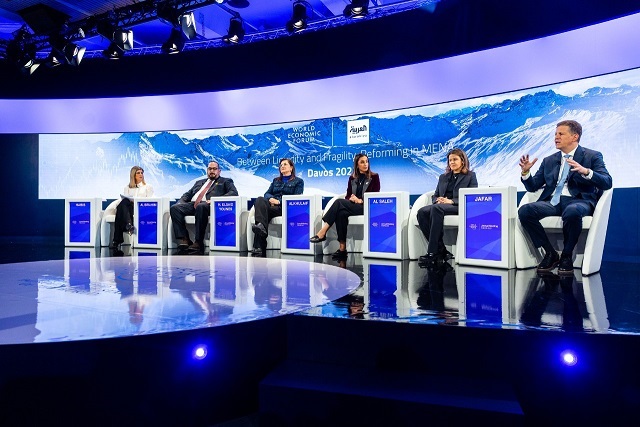 The Middle East is enjoying an important period of stability as oil prices, economic growth of 5.1% fuel the recovery out of COVID, said Crescent CEO.

The Middle East is enjoying an important period of political and economic stability with the regional economy buoyed by high oil process and economic growth, Majid Jafar, CEO of Crescent Petroleum, told business leaders gathered at the World Economic Forum in Davos on Thursday. Industrial production has improved, employment has begun rising, and tourism is recovering healthily from the effects of the pandemic, fueling healthy growth of up to 5.1% Jafar said.

However, risks from the global economic situation, like high inflation and interest rates, must be managed, especially in more vulnerable economies of the region before their impact becomes severe. As oil-exporting economies boost the region's growth potential, oil-importing countries in the rest of the region may face progressively tougher conditions in 2023 that will adversely impact young people seeking opportunities and work, Jafar said.

Jafar was speaking on the panel "Between Liquidity and Fragility: Reforming in MENA", which focused on the MENA region's economic dynamics in 2023. The panel was in partnership with Al Arabiya news channel, and also included H.E. Hala H. ElSaid Younes, Minister of Planning and Economic Development of Egypt, H.E. Faisal Alibrahim, Minister of Economy and Planning of Saudi Arabia,  H.E. Noor Ali Alkhulaif, Minister of Sustainable Development of Bahrain, and Henadi Al Saleh, Chair of the Board of Directors of Kuwait-based Agility.

According to the International Monetary Fund, the global energy crisis of 2022 has led to a big boom for oil producers in the region, adding an estimated US$1.3 trillion in additional revenues over the next four years. The region will also become much more important in the climate-energy nexus, helped partly by the hosting of the COP meetings and its growing role as the primary energy supplier, buoyed by its low-production cost of oil, growing importance of gas & solar, and major investments in hydrogen.

However, these factors have also heightened stresses and risks for MENA countries which import food, fertilizers and energy, such as Jordan, Lebanon and Egypt, he said.

The strengthening of the private sector will be vital for sustained growth, employment and competitiveness moving forward across the region, he added:

"Enhancing the role of the private sector across the region requires an improved finance infrastructure, assistive regulations, and concrete steps by governments to enable and empower companies and SMEs across economic sectors," he said. "Our region as a whole also needs to tackle the youth unemployment and female empowerment, which are critical to economic performance and recovery."

The World Economic Forum annual meeting is held from 16-20 January 2023 in Davos, Switzerland. The Annual Meeting convenes government, business, and civil society leaders to address the state of the world and discuss priorities for the year ahead. In addition, it will provide a platform to engage in constructive, forward-looking dialogues and help find solutions through public-private cooperation.

The full session can be viewed at the following link:

Crescent Petroleum is the first and largest private exploration and production company in the Middle East, with over 50 years of experience as an international operator in numerous countries including Egypt, Yemen, Canada, Tunisia, and Argentina, in addition to its continuing operations in the United Arab Emirates and Iraq.

Headquartered in Sharjah in the UAE, Crescent Petroleum has international offices in the UK and three locations across Iraq, as well as affiliated offices in Egypt and Bahrain. Crescent Petroleum is also the largest shareholder in Dana Gas, the Middle East’s first and largest regional private-sector natural gas company.

More News From this Client